This American Life: I Was Just Trying to Help 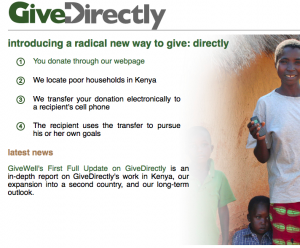 Last week's episode of This American Life--called I Was Just Trying to Help--has an extraordinary piece on GiveDirectly, a charity that gives money to poor households in Kenya via their cell phone.

The reporting frames the story in a number of interesting ways, including:

As for the second question, one important part of the answer is that until a few years ago, it was a dangerous and risky proposition: carrying large amounts of cash into remote parts of Africa required security teams, and never mind the complicated question of verifying the identities of the villagers who would line up to receive money from you. But the cell phone has changed all that--particularly in Kenya, where a system is in place that allows money to be sent directly to cell phones and SIM cards.

A larger part of the response the reporters got when talking to charities is this: Giving money is a handout, and handouts don't work.

Is that true, though? The guys that started GiveDirectly are interested in data, and so their organization is built to collect scientific data and analyze the best results. Here's how the TAL reporter puts it:

"Until pretty recently, the charity world has been about doing stuff that helps--without really thinking about, how much does it help exactly? And how much does it cost? And there does seem to be this shift that's happening--a shift away from smiling children and glossy brochures and happy anecdotes. A shift toward data. Philanthropy is getting nerdier. Last year the GiveDirectly guys gave a presentation at the corporate charity office of Google--a place where data counts for a lot. In the presentation they didn't show any people--what they did show were charts and studies and lots of numbers. And the people at Google were impressed. They gave GiveDirectly $2.4 million, and they told Paul and Michael [the founders]: You're thinking too small. Go figure out how to give money to lots more people."

As you become familiar with Philanthropy Works you will find a tone that suggests we need to constantly find ways to do what we do better. The double blind study that GiveDirectly accomplished allows them to prove that what they are doing makes a difference.

Another way to say "philanthropy is getting nerdier" is this: donors are coming to expect to know what they're investing in, and that while they assume a reasonable risk, they're also assuming that there will be a quantifiable return on their philanthropic investment. What is the value add of your organization? What is the value add you bring to the philanthropic process? Today's donors want numbers. They want you to prove it.

Also discussed in the piece is the work of Heifer International, an organization that gives poor families cows and provides training in cow care.

I Was Just Trying to Help is available free this week on iTunes and at thisamericanlife.org.