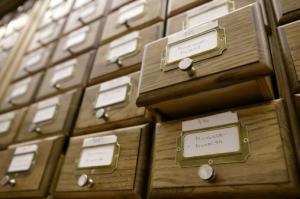 Just what it sounds like: a record of your “contact” with a donor. Having a contact report system in place lets you track a person’s relationship with your organization seamlessly over a long period of time. Since many supporters will greatly outlast the development staff and volunteers (development people turn over every 2+ years), it's imperative to pass on the collective history of individual donors with the organization.

In the old days these were done on notecards or forms and filed away, but thankfully now there are several good electronic options. Indeed, most fundraising database software offers a way to record contacts with donors.

Why Are They Worth the Work?

There was once a young woman -- let's go ahead and call her "Jenn" -- who became involved with a small nonprofit. She participated in its programs, she volunteered, and she gave money. She was very connected to and passionate about this group for around six years.

Eventually Jenn got married and moved away, but continued to follow the work of the organization and support it with gifts to the annual fund. Then, one dark winter day a short while after she'd written a check, a thank you letter arrived: addressed to HER HUSBAND. Her name was nowhere on the letter. And just like that, distance had been created between Jenn and the nonprofit. Even though she knew they had few resources and that in all likelihood the mistake had been made at the data-entry level (someone was updating addresses or something), the error left her irritated, feeling as if no one remembered or cared about ther history supporting the group.

If that nonprofit had had a practice of doing contact reports, probably the person who changed my information in the computer would have been able to see that it was me, not my husband, who was their primary supporter and contributor.

What Should Be in Them?

Writing a good contact report is a bit of an art, such that styles, even among seasoned development officers, vary widely. Some people include copious amount of content (describing the art on the walls in someone’s house, for example) and some are very brief, detailing only the key elements of a conversation. At the least, you should include:

You don't want to put anything in a contact report that you wouldn’t want the donor to see if they were to read their own record. So keep the juicy, gossipy details out, but do include information that is specific and meaningful -- and this is where the art part comes in. I once read a contact report that said something like “Mr. Smith is very vocal about his conservative political leanings. He thinks John McCain is a socialist.” That first sentence is completely relevant information to pass along; the second robs the first of its neutral tone.

No organization is too small to be recording its contacts with supporters and potential supporters. (Case in point, the story of "Jenn" above.)

By systematically tracking these relationships, you are doing the essential work of stewarding the individual’s relationship with the organization. Relationships that are nurtured and cared for by lots of people for many years are often the ones that lead to truly philanthropic major gifts. A donor who is passed off gracefully to a new staff member will make a mental note that your organization has its act together, engendering trust and possibly further support.

Anyone who has meaningful contact with donors -- ie, any interaction where new information is learned -- should be doing contact reports. This includes the executive director, board members, program staff, and all fundraising staff.

Now, I say that and your response may well be something like “Hah! In what world is that going to happen? I can barely find time for this, never mind convincing others to do it.”

I know it’s a huge challenge.  But rather than not do anything because it’s too much, start small.

Set up a simple implementation process:

Not only are you doing the right thing for your organization, the donor, and the person who comes after you in your job, but you're also taking the burden off of yourself to remember everything you hear. It may surprise you, once you start recording your contacts with people, how much you forget.