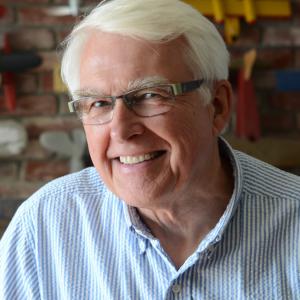 David Lawrence has been a senior leader in the development field for decades. He has worked at and consulted for major institutions all over the country and in the process has interviewed and hired hundreds of major and principal gift officers. You can read David's bio here.

In this week's interview, David talks about the top three attributes of the most effective major gift officers:

In the first part of his breakdown of what makes a successful MGO, David says, "Sincerity. I would describe it as understatedness, believability, a level of confidence that is apparent but not dominant, and just a genuineness that probably has a level of respect but not awe." (This part of the conversation starts right at the top, around the 55-second mark.)

"When you represent an institution," David says, "you have to believe in it. You put on the sweatshirt."

But passion is also a personal trait. "A lot of times you don't connect [with a prospective donor] over the organization, you connect over something personal." (Listen to this part of the conversation starting around the 5:40 mark.)

After David has talked about integrity and sincerity and passion, he says, "But the unusual attribute that I've found to be a better predictor of success than most everything else is something as simple as curiosity... It creates a willingness to listen, and I think curiosity sets you up to think - What makes this person tick? What is important? What does this person feel is important? That sets you up to connect around the values proposition of the donor -- not the organization, but the donor." (Listen to David speak about curiosity at around the 12:15 mark.)